I quite liked Starbucks before we moved, though (of all the coffee chains) Costa Coffee was probably my preference. But since we have moved here I have developed quite an addiction to Starbucks. Not because I particularly like the coffee or the food or the ambiance in the shops that appear in every mall and off every main highway. 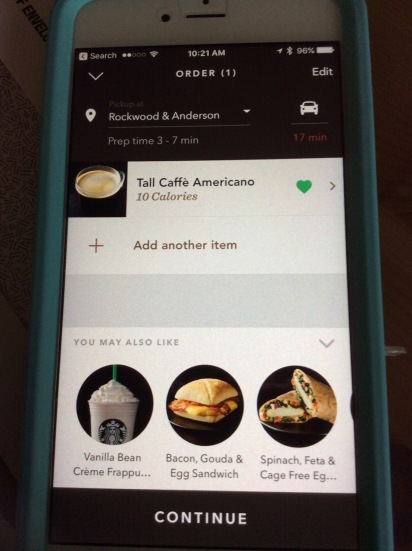 No there is one reason alone I have developed a passion for Starbucks – the Starbucks App!

No queueing or hovering at the counter waiting for drinks to come out. Just a simple press of the button on the app and you can walk in 5 mins later straight past the long queue and the throng of people round the counter as expectant as animals in zoo at feeding time to find your drinks just waiting with your name printed on it. That’s it. You pick them up and leave.

The app does it all. Transfers money from your bank to pay, finds the closest store, gives you directions to get there and tells you how long till your order is ready.

Of course that makes it seem so simple. What I have neglected to mention is that firstly I can not drive this ‘simple’ app.  I get stuck on the order screen. It makes no sense to me that to order a black coffee, I have to choose not filtered coffee but ‘Expresso drinks’. Once in that menu I need to scroll down for 5 minutes past Lattes, Mochas, Maccchiatos and Cappuccinos to get to  black coffee. Even then for some reason its not called black coffee but ‘Caffe Americano” ! 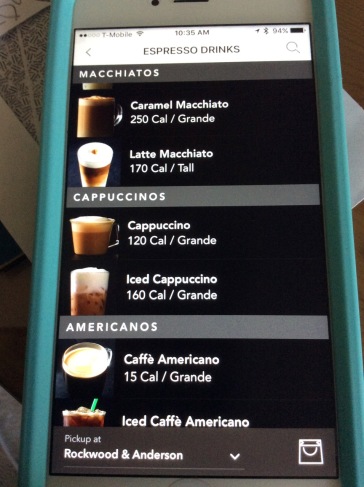 Having ordered I struggle to get the right store. You can be right outside one store and it will list another store as nearer or looking at the tiny map Great Hills and Jollyville looks pretty much the same as Highway 183 and Braker Lane.

So why do I still persist in using the app? Well it becomes an extremely easy process for me with my d

aughter in the car, who -to fuel her Vanilla bean Frappuccino with 2 pumps of raspberry syrup addiction -has mastered the art of picking up my phone and ordering before I have time to say “we don’t have time to get Starbucks”. She is the queen of Starbucks having even mastered the Starbucks secret menu. Disappointingly her drink (sometimes called a cotton candy) which used to come out a striking bright pink now comes out looking like a normal Vanilla Bean Frappuccino . Starbucks under pressure to reduce the number of ingredients has  now removed artificial coloring from the raspberry syrup. Occasionally you get lucky and a store still has the old syrup and the familiar bright pink reappears.

I am fairly conservative in my own drink choices. Normally from Coffee houses I buy – well – coffee. When I go for coffee with my British friend we drink coffee. Even when it is over a 100 degrees and the rest of the place is full of people drinking Iced Tea, Lemonade or Frappuccinos , we drink coffee. Which gets you some looks! I would go so far as to say if you see people in Texas drinking hot coffee in August they are probably not from Texas!

The only other issue with the Starbucks App is having to go in and actually collect it. Researching this I discovered that I could actually collect from the drive thru. The issue with that is that sometimes the drive thru queue is longer than the one in the shop! I sat in disbelief last week as the car in front ordered drinks not only for the two adults and kids but also two small cream drinks for their dogs! They then waited for the dogs to finish before driving on!

Anyway my usual solution to this problem is to send one of the kids. However this is not always a time saver. Last year when we were still novices at the app ( and her drink was still pink) my daughter went in to collect our order two Frappuccinos and a black coffee for me. Leaving the shop she slipped and her drink went flying valiantly she saved my coffee (slightly burning herself in the process) and most of her brothers drink. Nearly in tears she returned to the car. So then I had to get out and get her another drink. But since it was our absolutely favouritest friendliest most efficient Starbucks on 183 and Braker Lane, they replaced her drink for free. But the Cotton Candy stain outside where she dropped the drink remained as a reminder for months!

On another occasion, to avoid and argument between me and my daughter, my son volunteered to go. This was a big deal for him. I was relived to see him emerge with our drinks on a tray and make it back to the car without tripping, only to find, as he got in, he had forgotten the straws!

So, now I have the Starbucks App out, I can see I am only 11 mins away from picking up a Grande Americano. My finger hovers over the button…..